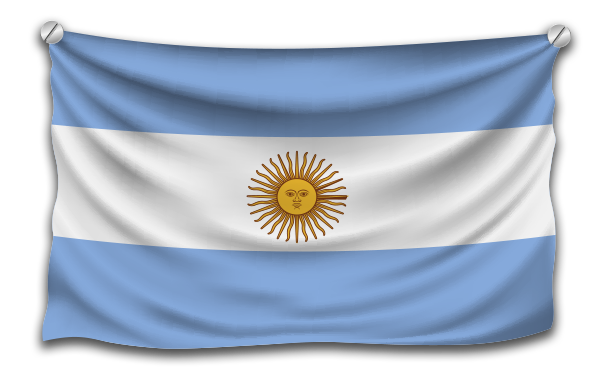 Furthermore, Argentina is a country rich in geographical varieties, from the northern subtropical regions to the southern glacial zones, the vast green plains in the center, and the highest mountains of the Americas. Like the tourist slogan says, “Come to Argentina and discover the five continents!”

The name Argentina, comes from the Latin term “argentum,” which means silver. The origin of this name goes back to the first voyages made by the Spanish conquerors to the Río de la Plata.

The National Constitution adopted in 1853 included the name “República Argentina” (Argentine Republic) among the official names to designate the government and the country’s territory. The country consists of grasslands and savannahs, vast plateaus, mountains and parts of the Antarctic. It borders to Uruguay, Brazil, Paraguay, Bolivia and Chile and has a beautiful coastline by the Atlantic Ocean, which is 4,725 Km long.

Argentina’s main characteristic is the enormous contrast between the immense eastern plains and the impressive Andes mountain range to the west. This is the frontier with Chile and boasts the highest peak in the Western hemisphere: the 6,959 m high Aconcagua.

Between the Paraná and Uruguay rivers, the Argentinian Mesopotamia is formed by low hills, where pools and marshlands evidence the ancient courses of these great rivers. In some places within the subtropical rain forest, there are fissures which provide such spectacular phenomena as the Iguazú Falls.

The Pampas, in the center of Argentina, is the largest and best-known area of plains. Agricultural and livestock activities are performed in this area, which includes the province of Buenos Aires, the northeast of La Pampa, the south of Córdoba and south of Santa Fe. Towards the south, from the Andes to the sea, there appear the sterile and stony plateaus of Patagonia, swept by the wind during most of the year. The Atlantic coast, lined with high cliffs, forms massive indentations like the Peninsula Valdés, with its spectacular and unique colonies of sea animals.

Education in Argentina is democratic, free and secular. Most of the secondary schools where the exchange students will study are public or semi-private. Private school placements are an option for additional program fees. In most Argentine schools it is compulsory to wear a uniform. Before coming to Argentina, the student will receive information on the characteristics of the school.

A typical school day in Argentina could look like this: The students get up early in the morning, have breakfast (coffee, milk and toasts with butter), they begin school around 8 – 8.30 am. Most students either go to school by bus or bike, and sometimes they are driven by host parents. Before starting school in the morning, student participate in the important ritual, “el saludo de la bandera”.

Once all students are in the principal hall remaining quiet, two students hoist the flag of Argentina. In some schools, the national anthem is also sung. After hoisting the flag, the students head for their classrooms where classes are held according to the different subjects. In some schools, it is common to work with projects. A class generally lasts 45 minutes followed by a break. There are schools where classes are held from the morning until the afternoon, especially bilingual schools. In this case, the students have lunch at school. Otherwise they go home to have lunch. There is always time, either at lunch or at dinner, for the family to get together. After having lunch the students usually do their own activities such as studying, resting, or an extra-curricular activity. Some of the most common activities after school are; studying English, acting classes, gym, basketball, football, volleyball, hockey, rugby or athletics. Of course dance is also popular, especially the tango!

The typical Argentine family consists of the father, mother and two or three children at least. The students will also have quite frequent contact with extended family members, who will be very eager to take good care of the student as well. Family relationships are characterized by visible affection that the students have to know about beforehand, in order to avoid surprises!

Affection is shown with kisses and hugs, which the student will experience from the moment of arrival in Argentina. The host family will be excited to show the student the natural beauty of their area, social customs such as drinking the popular “mate” beverage, play football, eat barbecue, and fully immerse them in the culture of Argentine. The host family will also be curious about the student’s culture, so it is important that the student is prepared to answer a lot of  questions.

Students must be 14-18 years of age. Students will take a Spanish level placement test upon application. Students are not required to have formal Spanish language experience, but should have at least a beginning level by arrival to Argentina.

Students have the option to apply for a student visa at their regional consulate or embassy before arriving, or to apply at the local immigration office in Argentina.

Have you finished your initial research about the Study Abroad Program in Argentina?
Are you ready to take the next step?
Please go ahead and submit your program interest to the ICES office by using the ‘submit’ button below.